How to Install Shingles On A Gambrel Roof in Berkley, MI

How to Install Shingles On A Gambrel Roof in Berkley, MI

Gambrel roofs, the ones that look like barns, may seem like a difficult roof to install shingles on. The slope changes on each side of the roof make it seem like a daunting task, but it’s actually as easy as working on a normal roof. Below, we’ll walk you through how to install asphalt shingles on a gambrel roof. 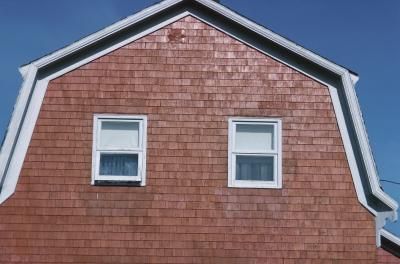 The tarred sides of asphalt shingles are flexible and easier to work with when they’re warm. So you should choose a warm summer day to install them.

Determine How Many Shingles You’ll Need

Usually a square of asphalt shingles covers a 10 ft by 10 ft area, or 100 square feet. Measure your roof, adding the square footage of every section and adding 5% for waste. Then divide the total by 100 to get the number of squares needed.

Start by laying the first asphalt shingle to the outer corner of the lowest slopping face of the Gambrel roof. Then use a nail gun to secure the shingle to the decking. Use three nails through the upper portion of the shingle.

Lay another shingle next to the first one. Secure it with the nail gun like you did the previous shingle. You’ll continue laying shingles end to end until you reach the other side of the roof face.

Once you get to the end of the roof face, you’ll have to trim the last shingle to fit. Do this by scoring the tar side with a razor blade and then snapping the shingle in your hands.

Laying on the Slope Change

When you reach the slope change on the roof, you’ll continue as normal.

Once you get to the ridge, or horizontal peak, you’re done with the three-tab asphalt shingles. So you’ll cap off the ridge with asphalt ridge caps (square shingles). And that’s it. Just remember to be careful when installing shingles yourself. It’s best to have someone help you and be on the lookout in case you have an accident.

Send this to a friend!